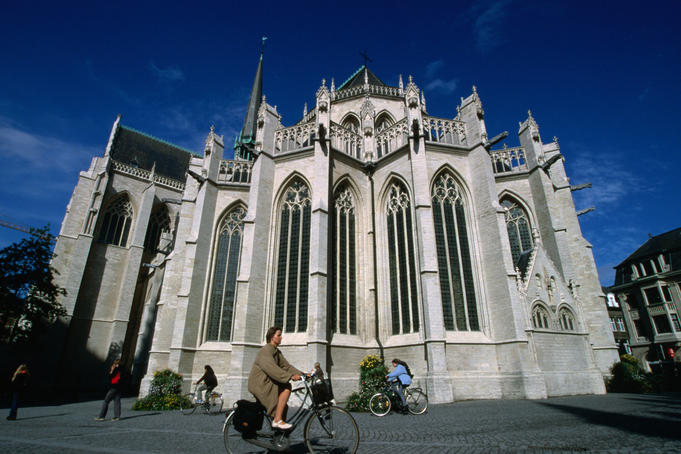 Back in the 10th century, a small church was built near the road named Cologne Bavay and the river Dijle. After the fire of 1176, a larger Romanesque church was erected. Its crypt still exists today under the present church.

When the town rallied after the political economic crisis at the beginning of the 15th century, they started to build the Gothic church, which is the one you can see and visit today. The western façade is only a poor shadow of the original design, i.e: the central spire which was 525 ft high.This project, of course, was a very typical example of megalomania and it remaind of the idea: the higher the better.

As visitors enter in the church, they are stucked by the armonic proportions (288 ft long, with the nave which is 87 ft high) and noble simplicity: columns without capitals, broad windows that underline the character of the architecture, a triforium all along the building, a choir with seven radiating-chapels.
Generally, this church is considerated the sucessful example of the Brabantine late Gothic style, just as St. Rombout’s Cathedral in Mechelen, Our Lady’s Cathedral in Antwerp and St. John’s Cathedral in the Netherlands.
You have to notice the Gothic stone Tabernacle (15th century), a series of paintings and the unfinished stone-model for the western tower.
The triptych of the Last Supper, finished in 1467, is considered Dieric Bouts’s masterpiece. The atmosphere around Jesus and His Apostles is solemn and subdued, and even Judas, depicted without his purse, does not disturb the spectator.
In the volets prefigurations of the Eucharist can be seen: top left, the encounter of Abraham and Melchisedech; bottom left, the Jewish Pascal Lamb; top right, the gleaning of the manna; bottom right, the profet Elijah woken by an angel.
If you are in that area, go visit it, since this is the oldest church in town.