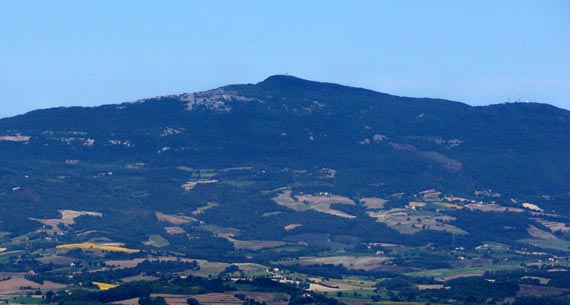 Monte Cetona, at 1148 metres above sea level, lords over countryside and contributes with its unmistakable outline to create one of Tuscany’s most typical and striking corners. It is a welcoming mountain, criss-crossed by kilometers of pathways that seems to love those visitors that treat it with respect.

Monte Cetona area hold ancient treasures such as castles, churches and palaces that togheter constitute the unforgettable journey through the social and political highlights of the communities that populate the territory.

The various phases of human settlement in the territory around Monte Cetona, from the Paleolithic until the end of the Bronze Age, are documented in the Monte Cetona Civic Museum of Prehistory, among the most important museums not only in the region but in the Italian peninsula.

The regions’s prehistoric features date from the Middle Paleolithic, when the Neanderthal man inhabited various caves, leaving behind rock tools and remains of animal prey; but only during the Bronze Age Monte Cetona was intensely populated: mankind settled mainly in the Belvedere area where he constructed huts, lived in shelters in the rock and buried his dead.

The rich archeological documentation of this time makes up the hearth of Museum. Closely linked to the Museum you find the Belvedere nature/archeological Park where the main prehistoric settlements are located: it’s possible to visit some of the suitably-lit hollows in the travertine stone such as the Grotta of San Francesco, the Noce and Poggetto caves, used by humans for worship or funereal purposes, and remains of open-air inhaboitations brought to light by recent digs.

The park area also features plants that display slight signs of human interventation such as holm-oaks and forest trees. The park represents a type of oasis accessible on foot by marked pathways, a singular place where history, archeology and nature are intimately connected.

But all the entire area of Monte Cetona is full of paths for walking, cycling, horse-riding developped along an extensive and manageable labyrinth of tracks and woodland lanes. Typical country villas in Tuscany are at disposal to offer you a comfortable vacation.