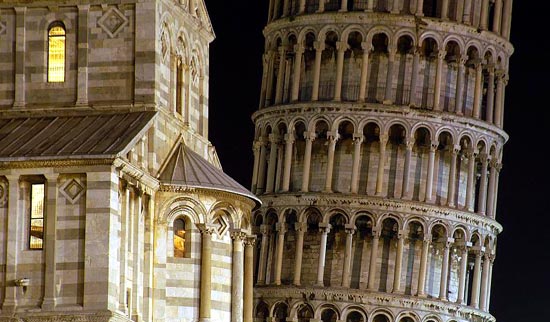 Among the most famous art cities of Pisa in the world, in the heart of Tuscany holds great beauty like the Leaning Tower and Campo dei Miracoli proclaimed World Heritage Merge.

The Leaning Tower of Pisa or commonly called The Leaning Tower was built by Bonanno Pisano in 1173, born from an erroneous assessment of the area and clumsy attempts to remedy the situation, today this wonder fascinates and amazes thousands of tourists who flocked each Campo dei Miracoli, one of the most beautiful squares in the world rich in artistic and natural beauty with its green slopes are home to wonders like the Romanesque Baptistery and the Duomo.

Once Repubblica Marinara, Pisa is a city full of art and culture, with its Romanesque churches like the Church of Santa Caterina and the Church of Santo Stefano dei Cavalieri, built on the design of great Vasari, his palaces like La Wisdom currently home to the most important Italian universities and museums of St. Matthew as famous for his two hundred paintings on wood in Via Lungarno Medici.

The historic center of Pisa is visited by many students and tourists all year round who flock to the commercial heart of Pisa, Borgo Stretto, with its elegant shops, arcades and the town although small has a fair amount of accommodation with cheap hotels, youth hostels and House of Young where to find a room at a good price.

Among the events of particular importance in the city of Pisa on 16 and 17 June we held the Regatta of Saint Ranieri, the boat race held in honor of the patron saint of the city, San Ranieri. On the evening of June 16th takes place the traditional torchlight procession through the streets of the city called the luminaries.