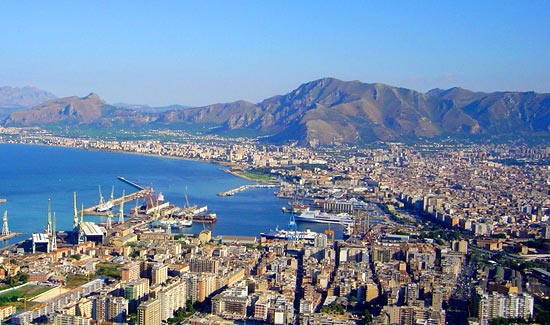 Palermo Sicily is certainly the gem among Italian cities to boast a wealth of rare beauty with artistic monuments, churches and buildings that have suffered from all the settlements have taken place in past centuries, the Arabs to the Normans.

The heart of the city of Palermo is made from the four quarters or place Vigliena which is the intersection of two highways that cross the city, Via Maqueda and Corso Vittorio Emanuele. Here are the four seventeenth century Baroque palaces decorated with statues and fountains that represent the seasons.

Very beautiful and picturesque is the Arab neighborhood of Palermo, the Kalsa which is close to the sea where it still in the homonymous square Kalsa breathes the ancient Arab culture where there are kiosks with strong smells of food cooked in the traditional Arabic cuisine.

Another place to visit in Palermo is much the Botanical Gardens, one of the most beautiful garden rinomanti in Europe where you can see plants from around the world with many rare to find. Especially good is the market in Palermo Vucciria, one of the most scenic locations where dive in a cross-section of life in Palermo to find many typical products of land and sea Sicilians.

During the summer Palermo is assaulted by so many tourists and most famous beaches like Mondello, Sferracavallo the Addura Cefalu and offer a unique view of the sea with crystal white sand and a few miles from the historic center.

We remind that in Palermo were born so many characters known as Pier Paolo Pasolini, Leonardo Sciascia and magistrates Giovanni Falcone and Paolo Borsellino. The patron saint of Palermo is Santa Rosalia and July 15 is celebrated each year with shows, music floats through the town until you reach the sea where the night is lit up by fireworks.