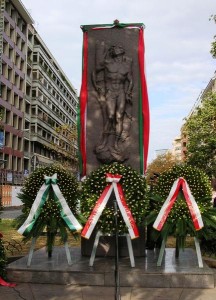 Located close to Porta Ticinese, where you also see some 4th century Roman columns, there is the Basilica of St. Ambrose, originally built in 379. It is a very important church not only because it is really old, but also because it is connected with this famous patron saint of Milan.

Another interesting church is, without any doubts, the San Carlos Basilica, but the most unknown one is definitely the the church of San Bernadino, situated in Piazza Santo Stefano (Saint Steven’s Square), close the Dome.

It was built in the 17th century in a cemetery, that is why it is decorated with the bones and skulls of people who came from hospitals and prisons. It is pretty similar to the skulls and bones you can find in the Paris catacombs, and you should really visit the place. Be aware of the fact that it is only open in the morning, so if you are there around 1 pm, after lunch time, you won’t be able to enter.

Piazzale Loreto is also another must place, if you like history, especially the one related to World War II. In fact, this square is the exact location where the bodies of Benito Mussolini and his mistress were hung up back in April 1945. It was shortly before the end of the war, after the Italian Partisans had executed them near to the Como Lake.

It is really easy to reach, since you can take the underground and you get off at the Loreto stop. You will also able to see the memorial to the Liberation in Corso Buenos Aires, a monument Italian people are really proud of. On the opposite, they don’t want to talk too much about Mussolini, so don’t be surprised if they will try to chance the focus of the topic.